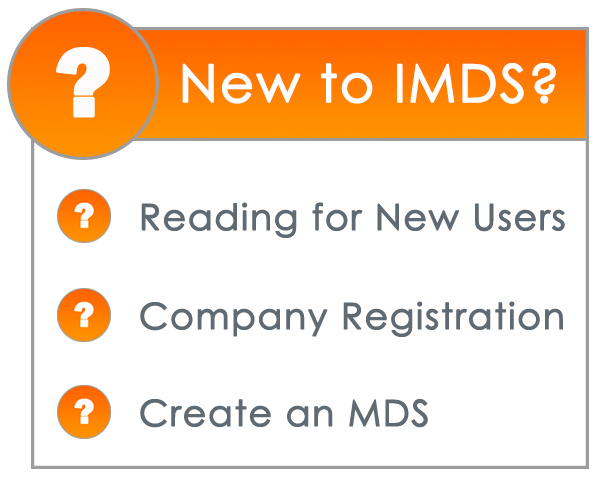 SCIP (Substances of Concern in Products)

What are the meanings of the criteria for Process Chemicals?

What happens if deleted MDSs/Basic Substances are contained in an MDS?

Why can one not find Lead or any other element by its Chemical Symbol?

Why is a Substance marked D, P, or D/P in IMDS and it isn't on the GADSL?

How should Hexavalent Chromium (CrVI) in Chromatized Zinc and Zinc Alloy coatings be handled in IMDS?

Why can't I find ions such as Chromium III in the Basic Substance List?

IMDS Basic Substances include a range of pure elements, chemical compounds and some mixtures that are generally accepted as the constituents of materials used in industrial applications (e.g. automotive, electronic etc.). Where the relationship between a Basic Substance and a Material is uncertain, the determination is made that permits optimal conformance with the ELV Directive and other regulations.

In the IMDS there are about 13,000 substances contained with their names and CAS-Numbers. A Chemical Service is responsible for the regular maintanance of the "list of basic substances" and researches all requiests for addition.

In the basic substance list in IMDS there are three different types of substances. Since there are limitations in e.g. IMDS Recommendation 001 on how to use these substances it is important to know the difference between them. The following types exist:

1. Regular basic substance - This is a basic substance that has a CAS-No. meaning it is a clearly defined substance. Water (CAS-No. 7732-18-5) is a good example.  With the exception of Pseudo-substances and jokers, you should always search on the CAS or EINECS number and not a text string. Substances may have many synonyms and not all are listed in IMDS. Additionally there is sometimes a difference between US and European spelling of a chemical. If you cannot find your substance, do a search on the CAS number in Google or some other search engine. If you don't find any hits, chances are you have an invalid CAS number.

2. Pseudo-Substance - A pseudo-substance gives an accurate description of the substance or the substance group but does not have a CAS-No. Some examples are "Acrylic resin" or "Cotton-fibre". It is important to point out that these substances are accepted as real substances in IMDS and are not considered as wildcards. They are therefore allowed to be used up to 100% according to the IMDS Recommendation 001 (although a material comprised of 100% of a single subtance is not generally allowed).

3. Jokers or Wildcards - These substances do not define a specific substance. Examples are "Miscellaneous" or "Not yet defined". Please note that any declarable substance is not allowed to be replaced by a joker. According to Recommendation 001 only 10% of the substances in a material are allowed to be covered by a joker. There are only 9 jokers/wildcards and all have the CAS number "system".

What are the meanings of the criteria for Process Chemicals?

Verification of the use is required when these substances are added to a material in IMDS. Suppliers must indicate the chemical presence type when adding these substances if the portion is >0.1%. If the substance is not present in the final part, the supplier is requested to refrain from adding it in IMDS.

What are definitions of each "chemical presence type"?

"Intended" indicates that the liquid or gas is still present in the finished part at a significant level (generally greater than 0.1%). Most assembled parts are solids, and have no liquid or gas content, but there are a small number of parts that have liquids or gases for a specified use. Volatile substances evaporate during production and are not contained in the finished part. These should not be entered into IMDS.

"Residue" is used if a small amount (generally less than 0.1%) of the chemical is left in the final part. This residue may be from a solvent where the majority of the solvent has evaporated, or may be a residue from a reaction.

Please find the answer in this document.

What happens if deleted MDSs/Basic Substances are contained

MDSs can be deleted by all users for a variety of reasons. If such a deleted MDS is referenced in another MDS a warning message comes up when somebody tries to send or check this respective MDS containing a deleted MDS. However, the MDS can still be sent. Usually a customer will not reject for a warning on a deleted MDS.

In rare cases, basic substances are deleted from the IMDS. This may happen because the basic substance is available in IMDS in a wrong way (e.g. as a duplicate). Then one of the two duplicates will be left in the system but logically deleted in order to keep existing references in those MDSs using this basic substance. The second version of this duplicate remains in the system and can be used as before.

For the deleted substances, the CAS number will still be in the system but internal to the system it has a different pointer in the database and the old pointer is no longer valid - generating a warning message. The old reference is no longer available for further referencing.

Technically, you can still send an MDS with this warning message. It is not a problem with IMDS. However, as each customer requirement is different, we cannot say whether it will be accepted by your customer if there are warnings.

Rejecting an MDS for this reason is possible, since the client can check before accepting/rejecting if a deleted MDS/basic substance is referenced. An exception is the use of in-house systems for analysis - those users might have more possibilities to search for deleted items.

Depending on the structure, this may require several levels of change - for example if a component has a sub-component (with a black dot in the icon) attached and the material is attached to the sub-component, they will need to:

You may wish to use analysis to find where the material with the deleted substance or deleted MDS is attached.

Due to how IMDS searches are conducted (implied * at the end of a character string) and the number of hits you would receive, Searching by the chemical symbol is not currently in the design requirements of IMDS. Elements from the periodic table have been entered with their name in European English or German. However, be aware that for some elements, the European English spelling is different from the American English (e.g. sulfur/sulphur) so searching by CAS number is best.

For sites where you can locate the CAS number of elements, please use an internet search engine (e.g. Google, Bing, Yahoo) and the phrase: periodic table CAS numbers.

Why is a Substance marked D, P, or D/P in IMDS and it isn't on

The GADSL is not meant to be an exhaustive list although users consider it as such. GADSL contains only substances that are expected to be on the vehicle as sold or at its end of life. There are many substances in the basic substance list that are under legislation as reportable or prohibited, but these are processing chemicals. Basic substances are added per user request with no quality judgment as to whether they would be on the vehicle as sold.

How should Hexavalent Chromium (CrVI) in Chromatized Zinc

and Zinc Alloy coatings be handled in IMDS?

Please read the related IMDS recommendations 008 and 009 in the IMDS application. After login to IMDS you can find it under the menu item Recommendations. Please be sure to download both files in each Recommenation as the 2nd file is referenced by the first file.

As some ions do have CAS numbers, they were included initially in the Basic Substance List. However, in the past 10 years opinions evolved and it was determined that it did not make sense to include them as pure ions do not exist as substances they never can be present in a material. Ions always are combined with other counter ions of different charge. Therefore you can no longer use ions in your material as an ingredient - only salts containing these ions.

Due to the large number of MDSs that contained the Chromium III ion, it was left active until late July, 2009.

The reason that there are no replacement suggestions is that the manufacturer of the material needs to know what the ion combines with and what salt it makes. The system cannot offer a suggestion because it does not manufacture the material. You need to contact a chemist familiar with the material in its final state.

This is why the ions were removed. A chemist needs to state what the final compound is. You cannot have free ions in a final product. It is expected that someone who knows the material will enter the data for the material.